Nature, culture and hiking can easily be combined in the green northeast of the largest Canary Island. In the following article, we suggest an inspiring cultural hike on Tenerife. This wonderful mixture of sporting activity and sightseeing takes you into the middle of the Canary laurel forest of the Anaga Rural Park, after you have discovered one of the most beautiful cities of the Canary Islands. A recreational hike for connoisseurs and culture fans, guaranteed to appeal to all the senses!

First part of the cultural hike on Tenerife: Old Town of La Laguna

Our hiking tip starts with a visit to La Laguna’s lively indoor market on the awesome Plaza del Cristo. Local farmers sell fresh fruit and vegetables from their own cultivation daily until 2 pm. Plants, spices, bread, wine, meat and cheese are also on sale. The vibrant colours and diverse offerings entice you to try and buy. By the way, those who shop at Tenerife’s local markets not only support the local agriculture, but also get high-quality products at reasonable prices. Afterwards, it is definitely worthwhile to watch the hustle and bustle in the cafeteria enjoying a barraquito (a coffee speciality invented on Tenerife). 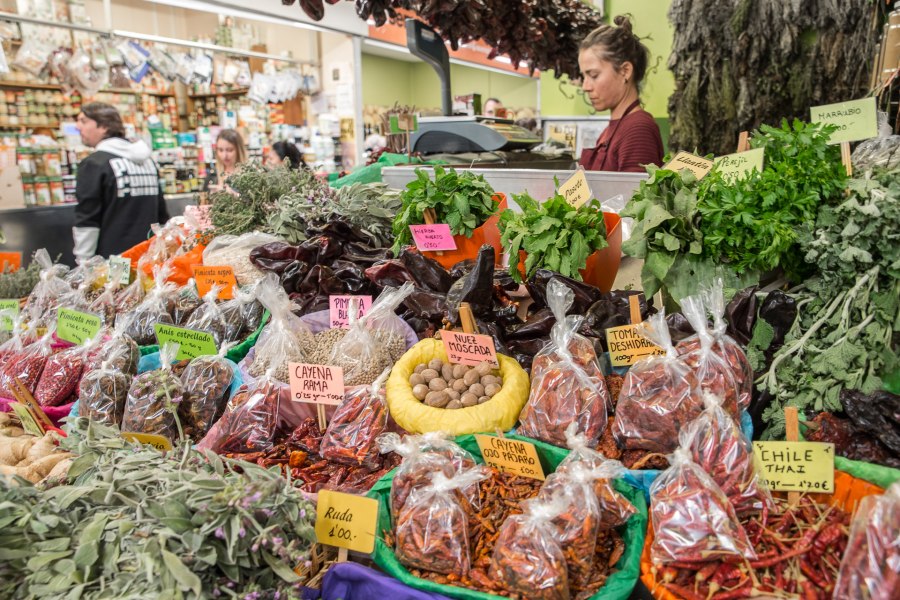 Exotic spices at the weekly market in La Laguna, the starting point of the cultural hike on Tenerife

Places of interest in La Laguna

La Laguna is a powerful city with numerous interesting buildings. To give you an overview, this cultural hike will take you to the highlights of the sights within the old town. Immerse yourself in this fascinating city, which has been a UNESCO World Heritage Site since 1999. Discover the many historic buildings from the colonial era, noble palaces, churches and convents with cloisters, all lovingly renovated. The most important monuments of La Laguna are also all within a walking distance. 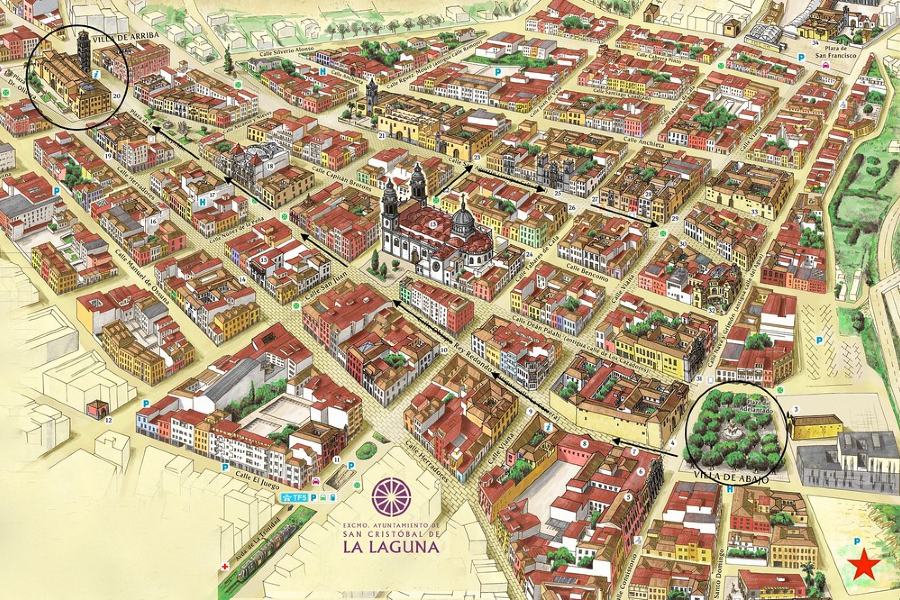 In the old town of La Laguna, the streets and alleys are arranged like a chessboard pattern

From the market, for example, you can go directly to the Casa del Adelantado with its enchanting inner courtyard (patio). The former home of the famous Alonso Fernández de Lugo, the founder of La Laguna at the end of the 15th century, now houses the tourist information office. La Laguna was laid out after the Spanish conquest in the then modern Renaissance chessboard pattern. Besides, this also made the city a model of urban planning for almost all colonial cities in Latin America. 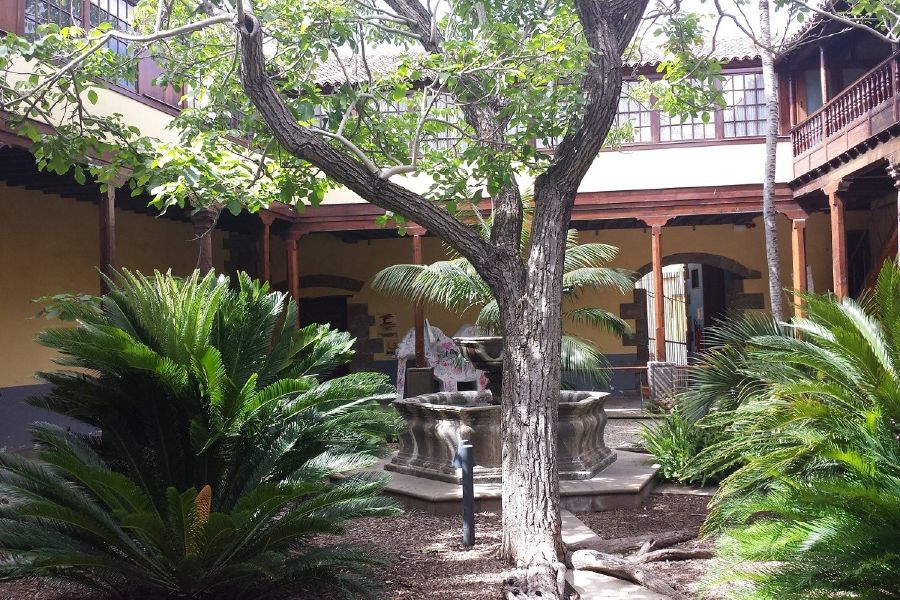 A must-see: The former monastery of San Agustín with its stunning cloister. The first university in the Canary Islands was founded there in the 18th century. The attractively planted front garden with benches and various trees and plants is particularly worth seeing, but the lushly overgrown inner courtyard is also impressive with its many plants and red columns. An excellent place to relax. In addition, the monastery houses a gallery with changing exhibitions. 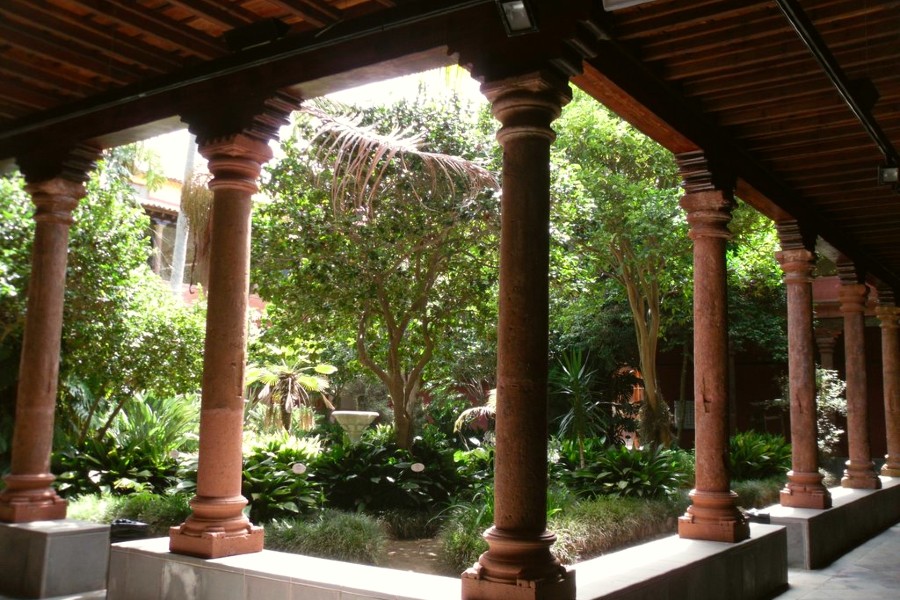 Highlight of the cultural hike on Tenerife: the monastery of San Agustín with its picturesque cloisters

The present and the past seem to virtually merge in the colonial old town of La Laguna. Not only does cultural liveliness pulsate on the streets, but a touch of the past is present on every corner. Today, around 155,000 inhabitants live on more than 102 square kilometres, including about 25,000 students. This university city has therefore an incredible buzz about it. Street musicians, trendy bars, nice little shops and a colourful crowd make strolling a pleasure. In our opinion, La Laguna has the best churros (fat pastries similar to doughnuts), we recommend you to try them with a hot chocolate! 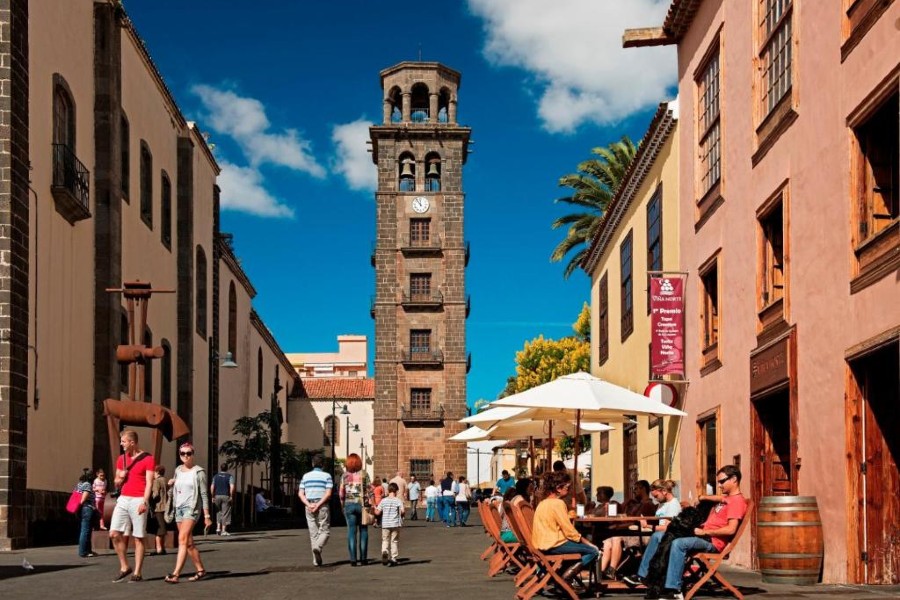 In La Laguna, you can simply stroll through the pedestrian streets and soak up the atmosphere 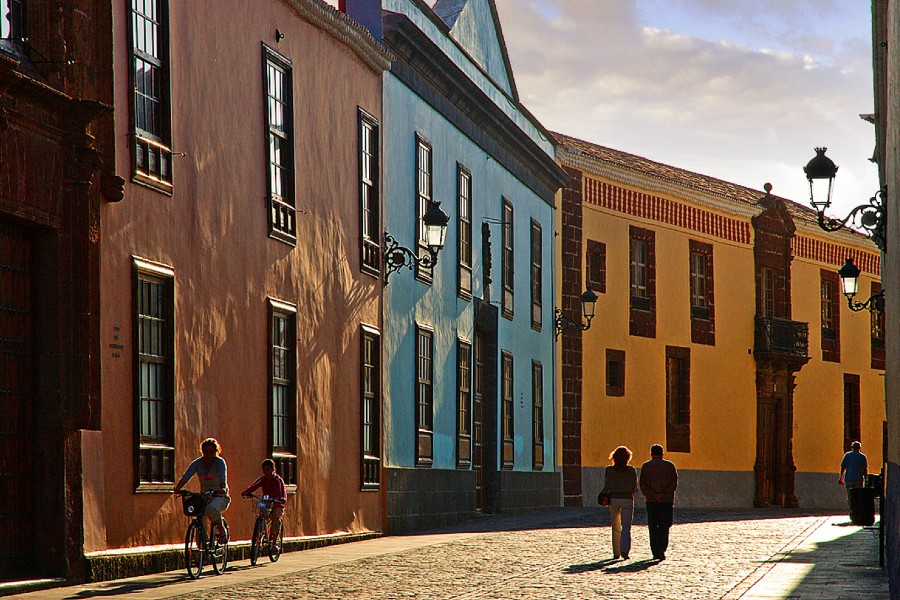 La Laguna, the past capital of the island, is 65 km from Buenavista del Norte and lies at a cool 550 metres above sea level. It is also very easy to reach by public transport from all towns in the north of Tenerife. Due to its location, La Laguna was once a strategically very valuable colonial town. In addition to protection from attacks from the sea side, the landscape also offered perfect conditions for agriculture. In the surrounding area, this has been partly preserved until today. 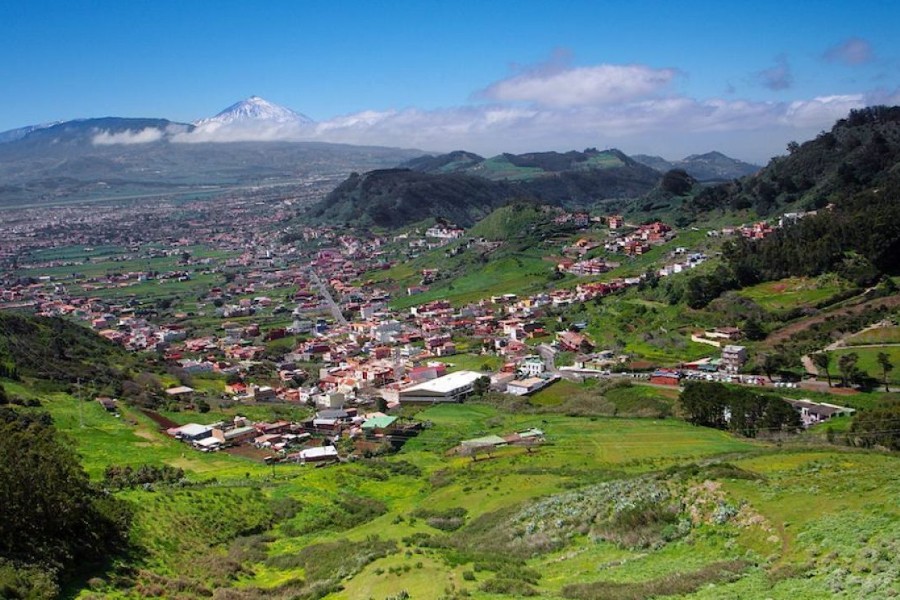 Very close to La Laguna lies the Anaga massif, which is rich in biodiversity. Thanks to the trade winds and its altitude, rainfall keeps the region evergreen. As a result, La Laguna’s skies can be covered in mist, with the possibility of showers. Although the temperature is generally pleasant, it can change abruptly in a matter of minutes. We therefore suggest you to pack warm clothes and a rain jacket in your backpack.

Relaxed hiking in the cloud forest

In contrast to the city life, the cultural hike offers you the chance to discover the peace and silence of the Anaga massif, declared a Biosphere Reserve by UNESCO in 2015. Its quiet paths, under dense trees of laurel, heather and ferns are ideal to slow down. The mystical primeval forest with laurisilva vegetation is unique on the mountainous Canary Islands. Especially in winter and spring, dense fog often hangs over these forests, creating a magical atmosphere. 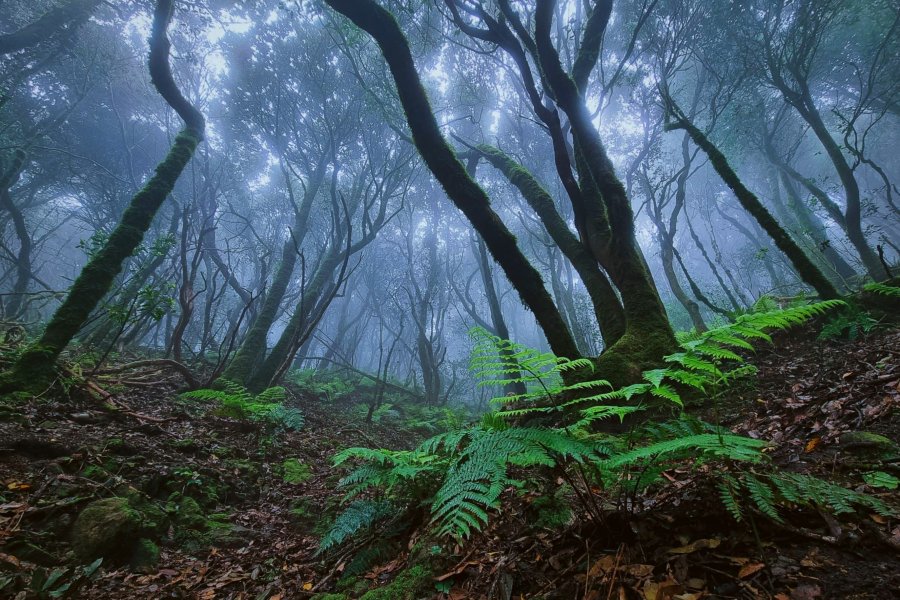 In Anaga, you can observe endemic species of flora and fauna, such as giant ferns, tree-hanging lichens and rare mosses. The laurel forests are basically a relic of the Tertiary Era, which ended about 2.5 million years ago. In Tenerife, these forests can still be found in the mountains of Anaga and Teno. You can get more information on the Teno Nature Park in our blog post “Traveler’s Guide to Punta de Teno”.

End the cultural hike on an extraordinary beach

If there is still time left, you can finish the cultural hike at the popular Las Teresitas beach and recover with a refreshing bath in the ocean. You will descend from the Anaga Park along a picturesque road and pass through three different ecosystems in just over an hour. Our destination is a few metres away from the traditional and typical fishing village of San Andrés. 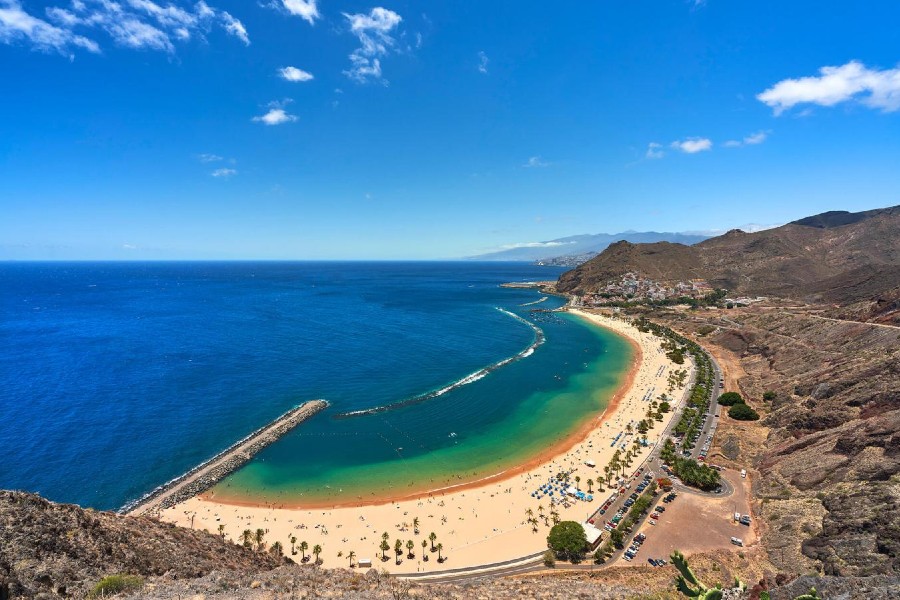 At the end of the cultural hike on Tenerife, the paradisiacal beach Las Teresitas awaits

Long, wide, golden yellow, with sand from the Sahara, Las Teresitas beach is for many the most spectacular beach on the island. Breakwaters ensure safe swimming. The small restaurants on the beach, called chiringuitos by the locals, serve fresh fish, cocktails and a wide variety of typical tapas.

You don’t want to hike alone, but prefer an organised excursion to the Anaga Rural Park and La Laguna? Then just take a look here. Our partner in the south has the suggested cultural hike on Tenerife in its programme every Friday. Steffi from Teneriffa Kreaktiv is looking forward to your request!

We wish you a great day in the northeast of Tenerife!

OKSaber Más
Abrir chat
1
Powered by
Hey there, if you have any questions you can message us here in WhatsApp! :)