Until the 1960s, the picturesque mountain hamlet of Masca was only accessible on foot or by donkey. Nowadays, it is well connected to the rest of Tenerife by road. Winding roads lead to exciting hairpin bends and narrow corners. The trip will take you through deep ravines covered with lush green vegetation. Once you reach Masca, the natural beauty of this remote and stunning place will overwhelm you. Most visitors come with the idea to hike through the famous Masca Gorge. 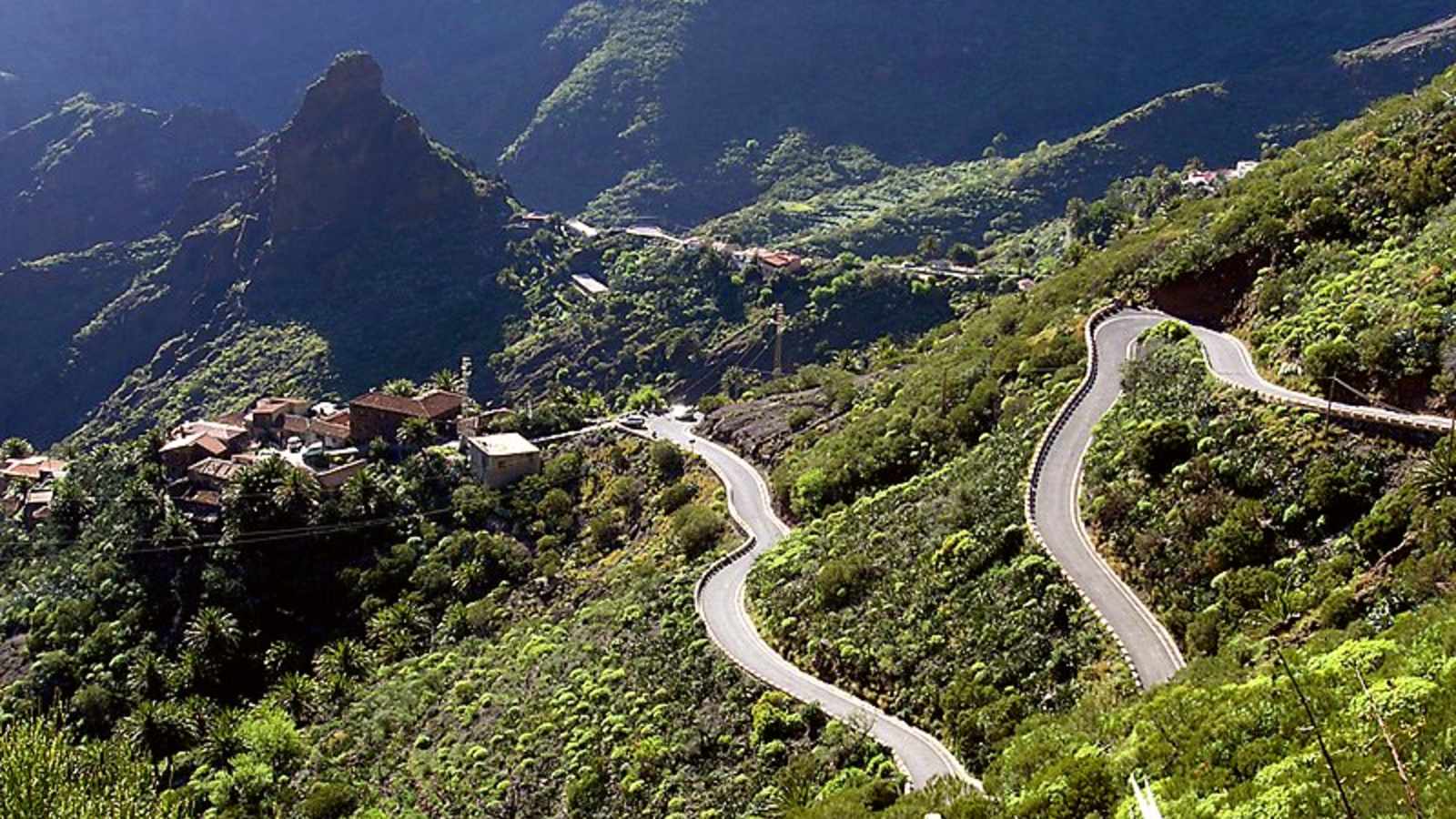 Masca is located in the northwest of Tenerife and belongs to the municipality of Buenavista del Norte. The small hamlet has about 80 houses and a hundred inhabitants who originally lived from agriculture. Thanks to tourism, most of them now run casas rurales (rural accommodation), local restaurants, bars and craft shops.

The tiny village is nestled amongst the Teno mountains, one of the oldest geological parts of Tenerife. Rich endemic flora and breathtaking rock formations are results of numerous volcanic emissions eight million years ago. Masca lies at 650 meters above the sea level and impresses with a unique setting. Rocky ravines fall away from the edges of paths and houses which, mixed with colourful plants, provide excellent photo opportunities. 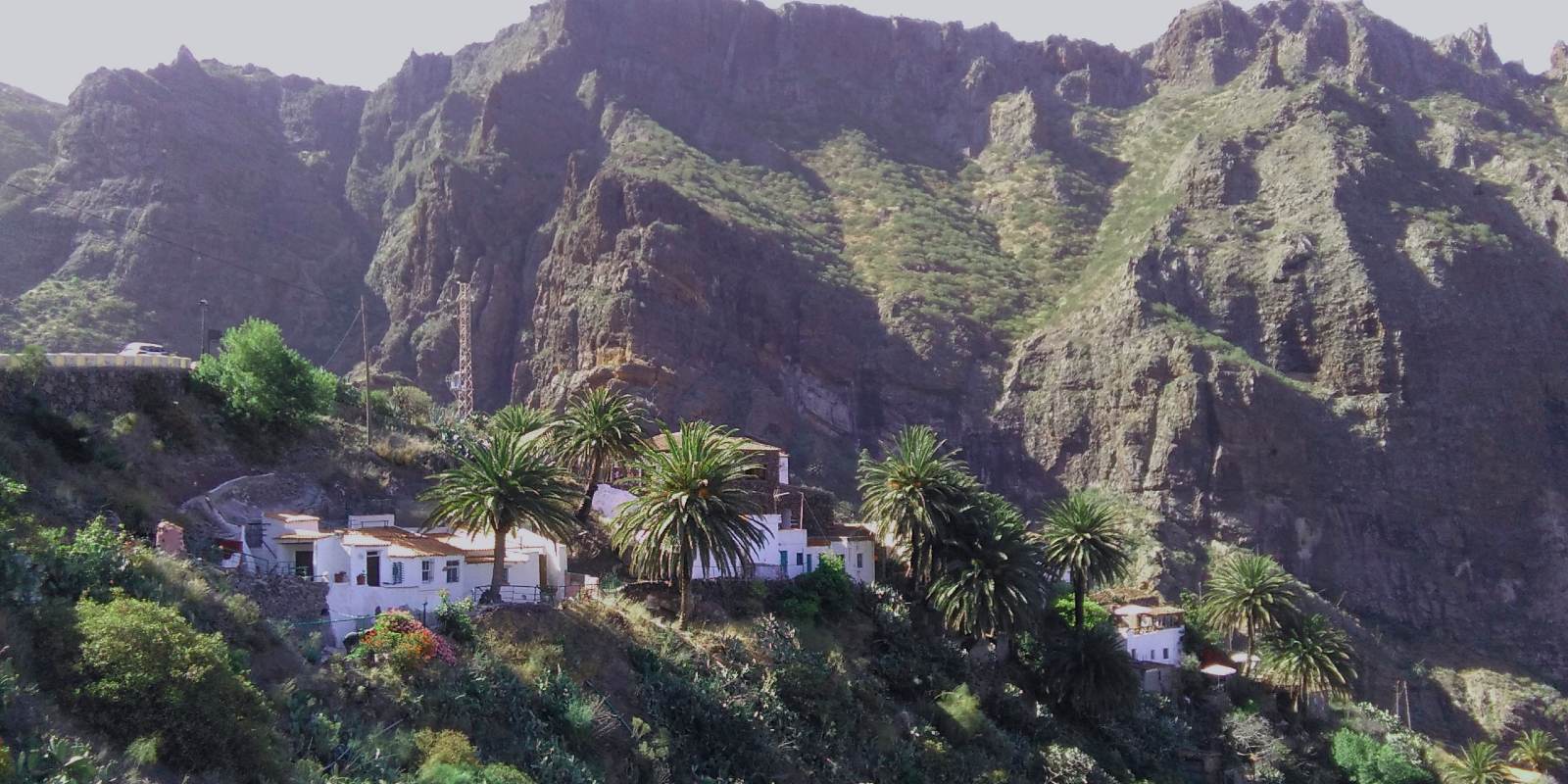 Masca was one of the Guanches last refuges from the Spanish conquistadors in 1496. Sepulchral remains of the aboriginal inhabitants of Tenerife have been found, as well as petroglyphs in roque Tarucho and La Fortaleza. Legends say that the Masca beach was a perfect hideaway for pirates to surprise and take over the ships that arrived from America.

How to get to Masca and the Masca Gorge

Masca is located within the Teno Rural Park, a protected natural area. As a result, the access to Masca by car has been restricted in order to reduce the environmental impact of the large number of visitors over the last years. For instance, the new measures allow access only by TITSA public bus.

You may take the line 355 straight to Masca, which takes about 15 minutes from Santiago del Teide and 40 minutes from Buenavista del Norte. On the bus you can pay in cash, by credit card or with the electronic transport card TEN+. Obtain the latest bus timetable from the bus stations or from the TITSA website. 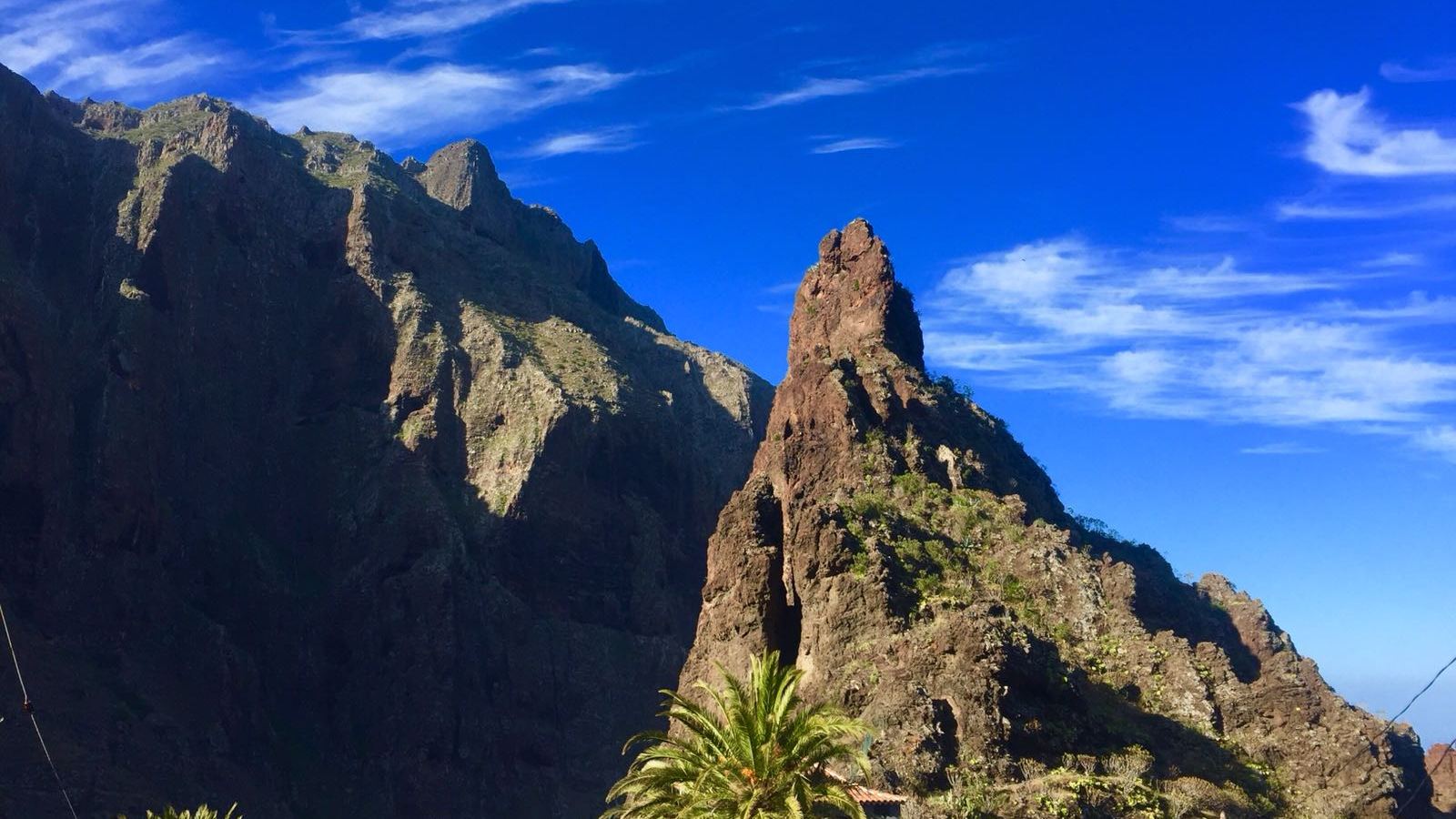 By bicycle to Masca

A ride to Masca is quite a challenge. You can start in Santiago del Teide or Buenavista del Norte. Coming from Santiago del Teide you will ascend a mountain slope to the Degollada de Cherfe (1,057 m) where the viewpoint Mirador de Masca is located, before plunging down towards the village of Masca. From Buenavista del Norte you will have to overcome 14 kilometers of demanding climb with slopes between 13% and 20%.

Although the cycling tour to Masca is surely an unforgettable experience, it is also very technical and requires a good condition and experience riding major mountains. We bring you in contact with local companies that offer both rental or guided tours. 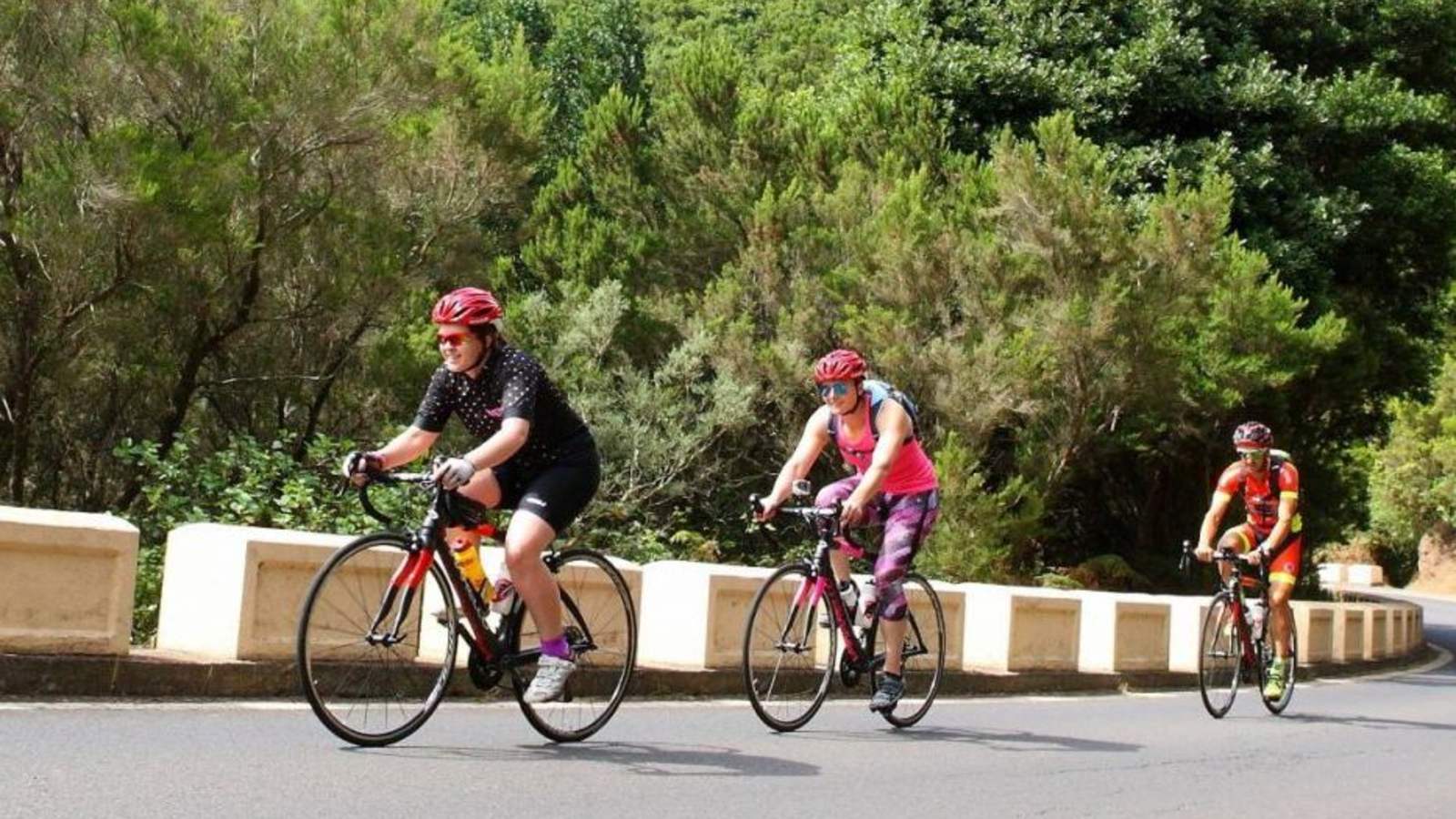 We think there is no better way to explore the surroundings of Masca than by wandering on foot. Plenty of hiking trails of different level bring you to and around Masca. From Santiago del Teide, an exciting ridge walk over the Cumbre de Bolico (the meteorological divide between the north and south) leads you to the mountain hamlet of Masca with wonderful views into the Masca Valley and out to the island of La Gomera. If you come from the north, you may start your walk in El Palmar Valley and enjoy the spectacular, rugged scenery of this less visited area of Tenerife with a 4 hour walk. 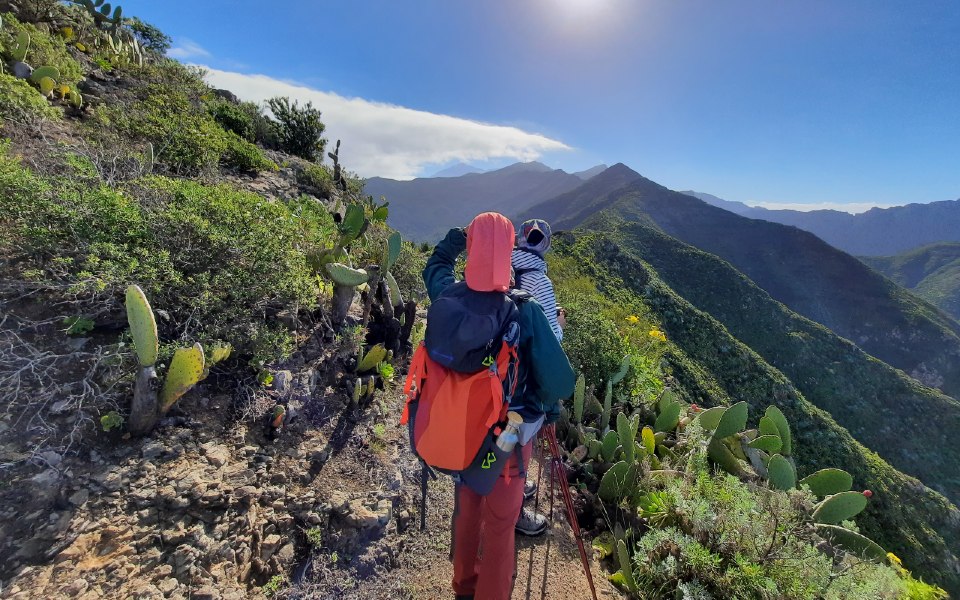 Things to See and Do in Masca

A huge Indian laurel stands out on this picturesque village square. Right next to it you will see the white-washed Masca Church, built with volcanic stones and Canary pine woods. The square is certainly a great viewpoint to the ravine beneath. Similarly, you can see the outstanding Roque de Catana from here, one of the most photographed natural monuments in Tenerife. Further, there are also nice restaurants around, musicians, artisans and local farmers who sell their products. In conclusion, the square is the right place to have a break in the shadow and listen to street musicians while enjoying a postcard-perfect view. 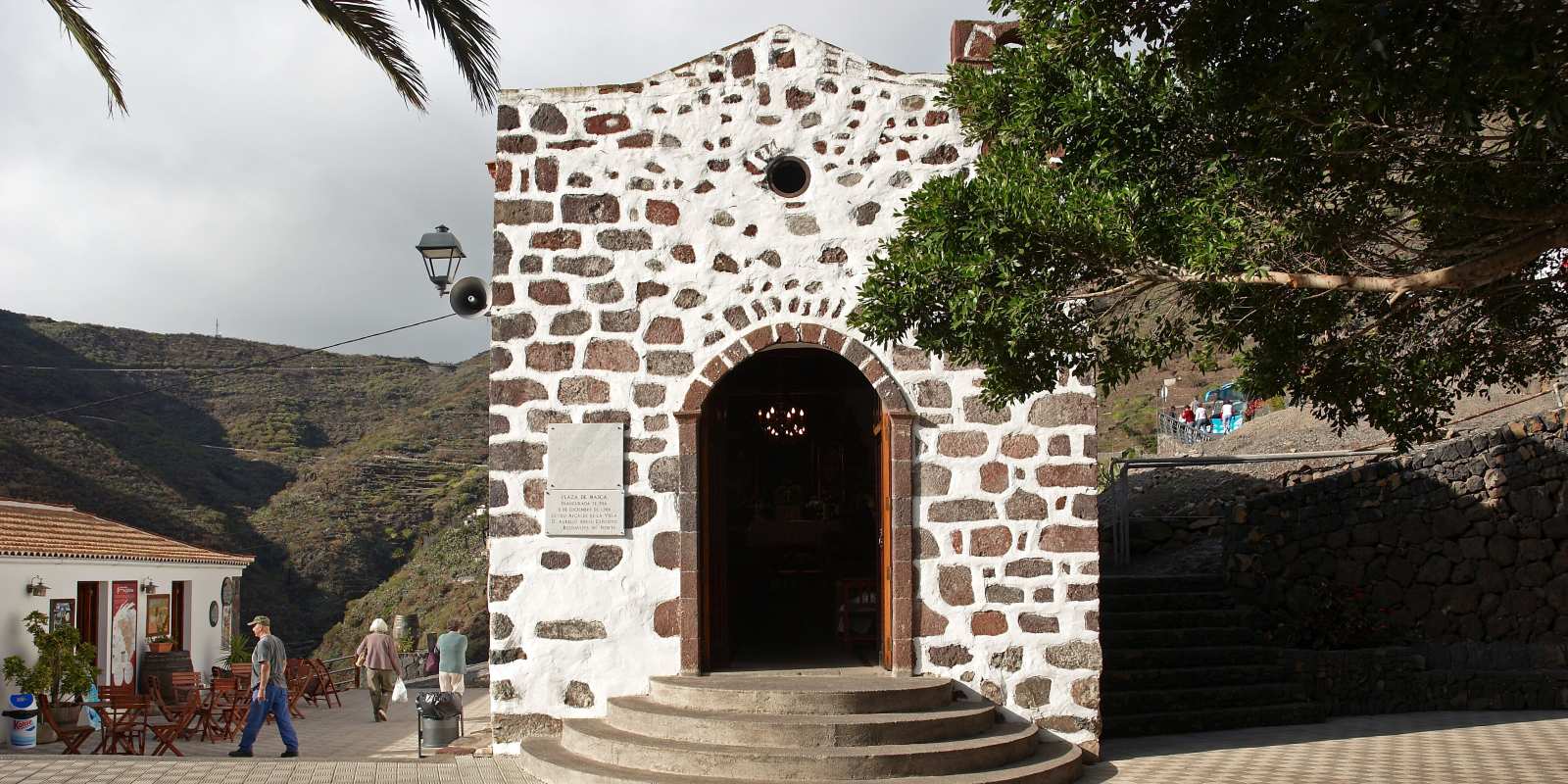 The idyllic and tiny Masca Church

The building of the small museum is speculated as being an old school for the Guanches. In this Ethnographic Museum you can see up close and inside what the typical architecture of these farmhouses is like and you can get a firsthand sense of traditional rural life hereabouts. It houses explanatory panels, photographs, primal tools and unique artifacts of this isolated Guanche settlement. 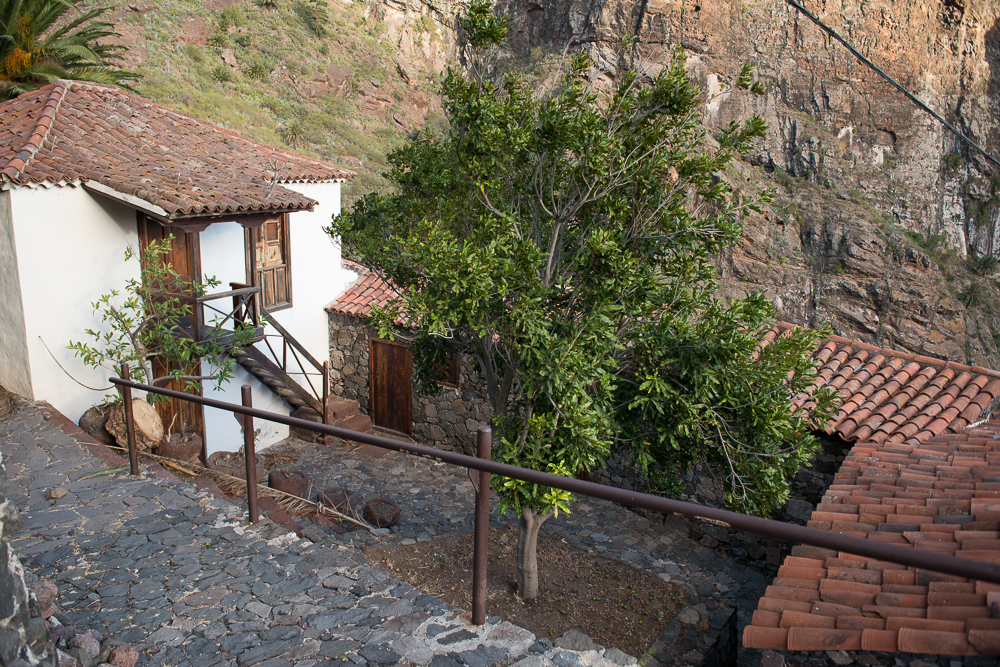 The museum of Masca is situated just behind the plaza

To walk around Masca is to get an in-depth understanding of its rich history and culture. Steep walls rising on either side of the village add to its beauty. Marvel at the construction of the traditional houses, resting precariously in narrow crooks of the ravine. Its stone dwellings stand out for their simplicity and modesty, made with very thick walls based on carved ashlars, as well as the use of masonry and wood.

These constructions were expanded according to the needs, which caused misalignments in the original layout and certain problems of connectivity between the old and new rooms. In general, all buildings are well oriented according to the climate and perfectly integrated into the landscape. Delight in this rural atmosphere where the peasant life and the serenity of its inhabitants have been maintained until today. 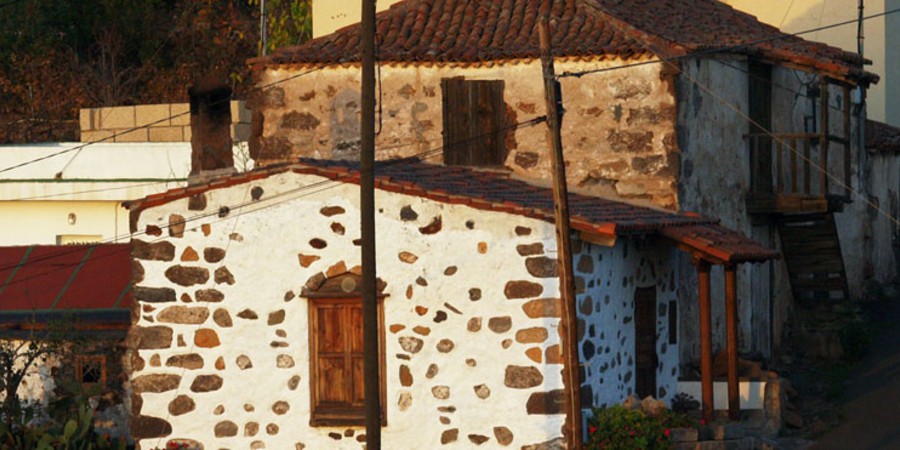 Facade of a typical rural house in Masca

The famous gorge is open again

On March 27, 2021, the ravine was officially reopened to the public.

Masca Gorge has been closed by the mayor of Buenavista del Norte on February 26, 2018, when a group of hikers decided to descend despite the government’s alert for stormy weather. Due to the heavy rain and winds they had to spend the night in the ravine as they could not be rescued. In the past, several fatal accidents occurred due to reckless behavior of visitors.

As a consequence and to manage the risk of this hiking trail, the whole path through the ravine was transformed, providing it with photovoltaic panels, signage, stone steps, railings and a visitor centre.

The Masca Gorge connects the village with the beach

Being one of the most popular walks on Tenerife, the 5 km canyon is geologically very interesting. The trail passes through an old dam and alongside different water channels built on the banks of the ravine. Discover how wind and rain have built bizarre volcanic rock formations. 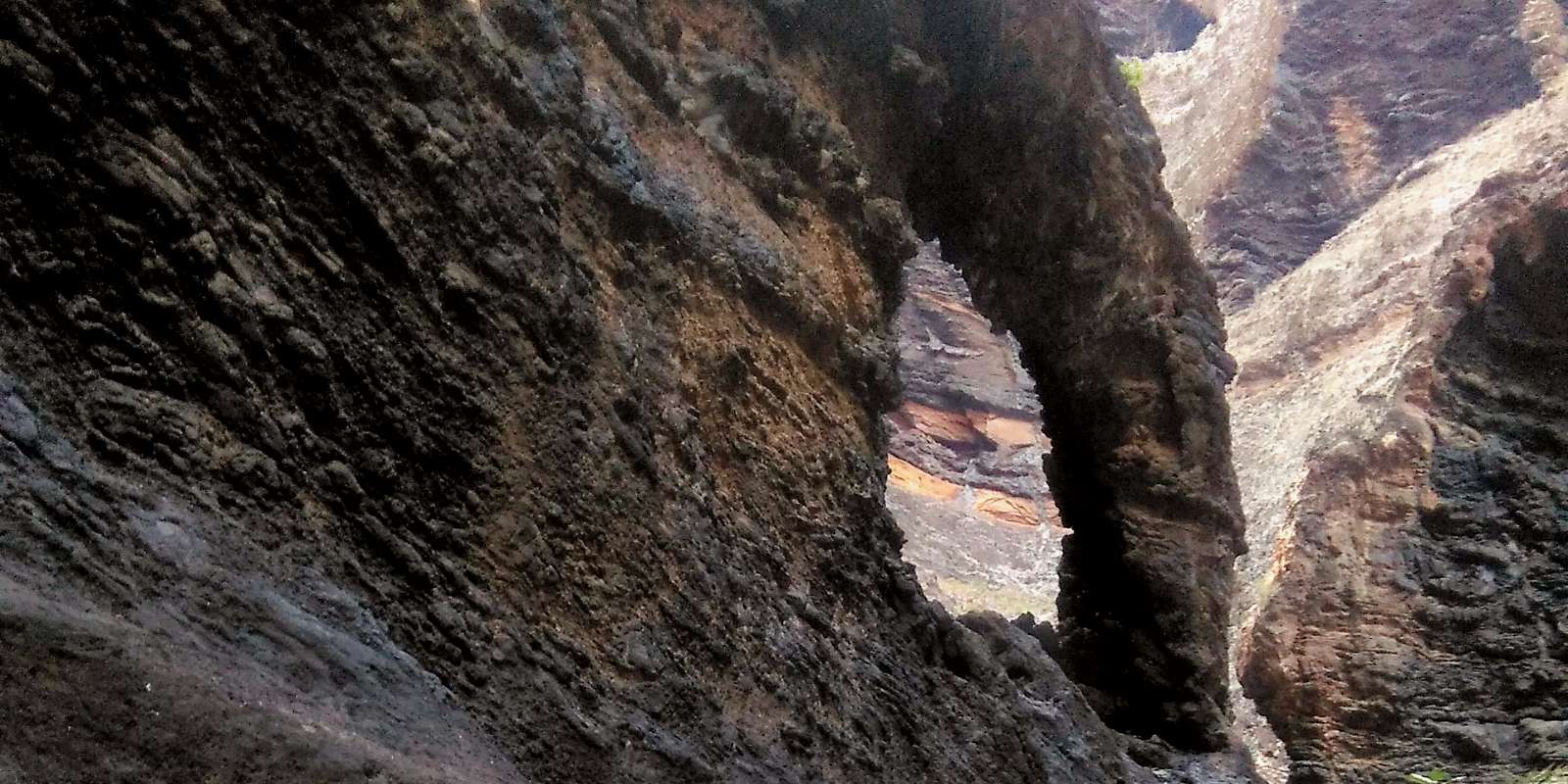 You do not need to be an athlete to descend or climb up the ravine, but a minimum fitness is mandatory, because you have to overcome 600 meters. In general, the trail is easy to follow and well sign-posted. You may start from the village of Masca and follow the bottom of the canyon lined with lush vegetation and endemic plants down towards the sea. Steep walls of the gorge tower above you, rising more than 400 meters on each side. After between 3 and 4 hours of stunning descent you will arrive at a wild beach with a pier. 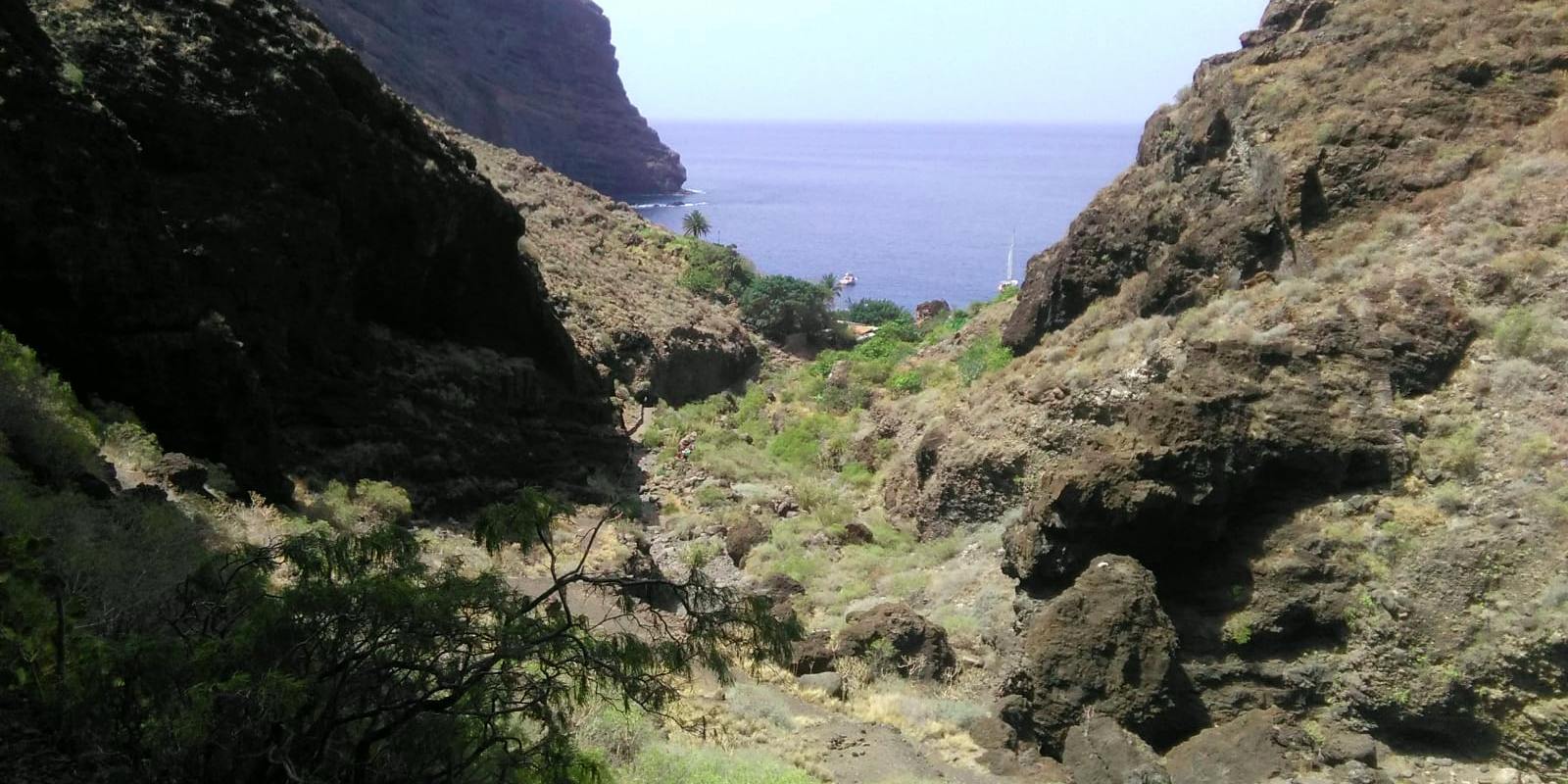 Only a few meters from the beach where the gorge ends

Please bear in mind that once down the beach, walking back to the village takes much longer and requires a high level of fitness. In other words, you can take a short boat trip to Los Gigantes marina or to the jetty of Punta de Teno to avoid walking back up the ravine again. However, if you are thinking of using sea transport first, you can also climb up the ravine from the beach to the village.

Flora and Fauna in a unique setting

The Masca Gorge is one of the most important spots in the Teno Rural Park. It is home to a large community of endangered plants and endemic species. During the hike you can see cardons, tabaibas, palm trees, verode plants, opuntias, agaves and some almond trees. Traditional crops are potatoes, yams, Masca red onion, pumpkins, figs and fruit trees. 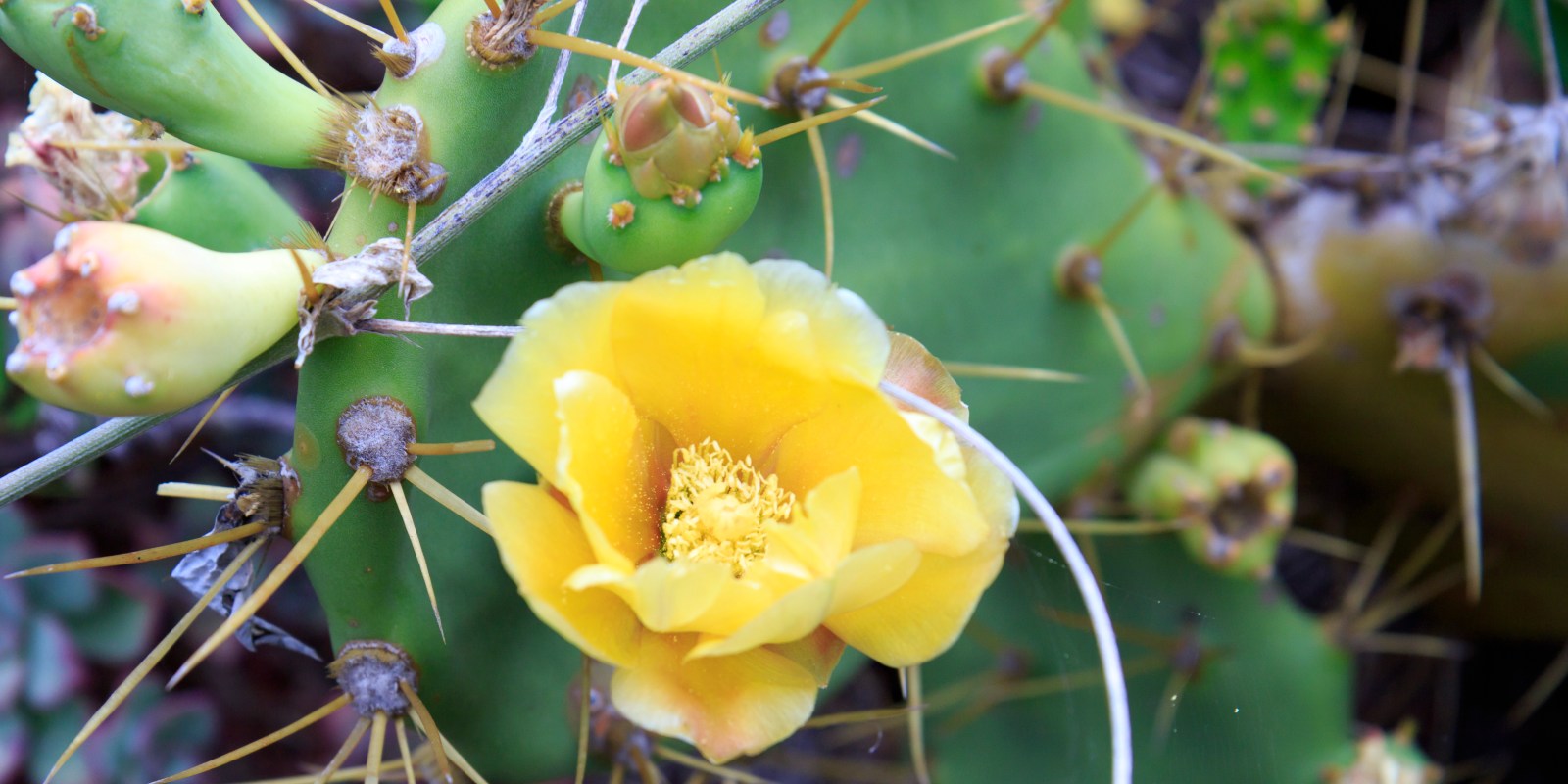 With regard to the fauna you can observe some goats at the mountain slopes but also invertebrates like the recently discovered spotted lizard or Teno lizard (Gallotia intermedia). A great diversity of resident bird species live here such as the hoopoe, the Moorish partridge, the falcon as well as mammals introduced from the continent (rats, mice, hedgehogs, rabbits …).

The «guincho», also known as «osprey» is one of the most endangered species in Spain and this area of Tenerife is where you can find 3 of the 7 pairs currently living on the island. In short, this gives you a clear image of the degree of vulnerability of this species. 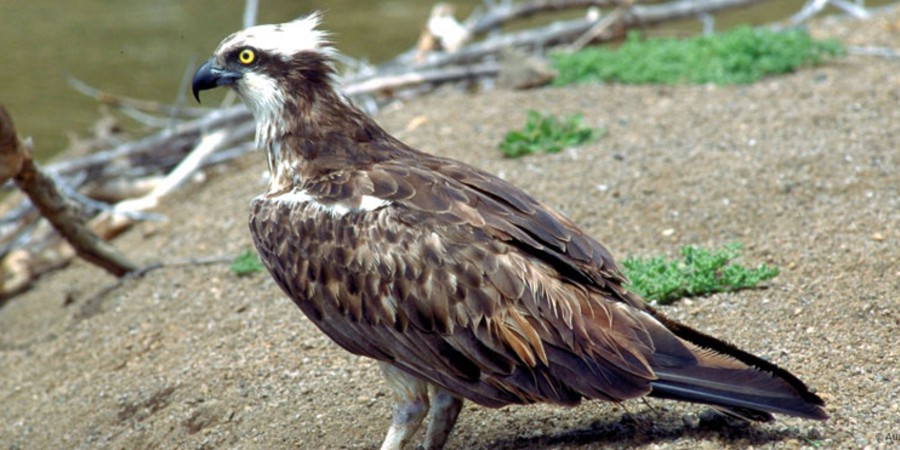 The secluded, small beach offers rocks and black volcanic sand. On the right side, a jetty was built to transport visitors to Los Gigantes and Punta de Teno. You can enjoy a refreshing bath in the Atlantic Ocean while observing the hovering of seabirds over the cliffs. 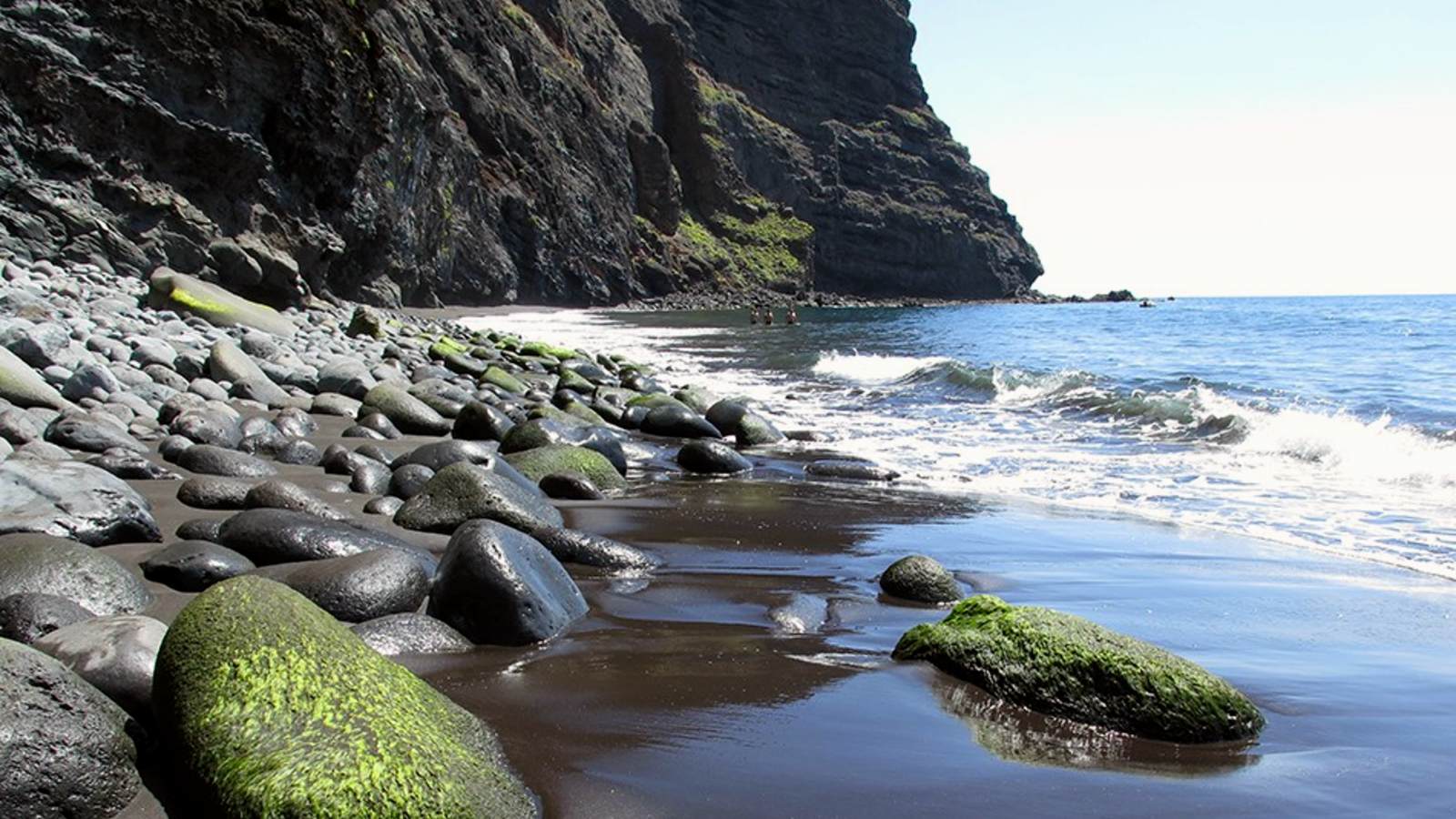 Rocky beach at the end of the Masca Gorge

How to organize your walk through the Masca Gorge

The Masca Gorge is after Teide National Park the main attraction for Tenerife visitors. Due to its fame, it is not always possible to get a reservation in time. However, we know different wonderful alternative hikes around Masca, which are just as exciting as the famous ravine.

Your host Sergio is a professional mountain guide who organizes private excursions in the surroundings of the Masca Gorge and has designed a special hike for you: Top Tour Masca. Get more information here and make your reservation.

We look forward to welcoming you soon!

Want to join the discussion?
Feel free to contribute!

OKSaber Más
Abrir chat
1
Powered by
Hey there, if you have any questions you can message us here in WhatsApp! :)